If you're happy to muck in, a spot of alternative volunteering might give
you a fresh outlook as well as a bargain break 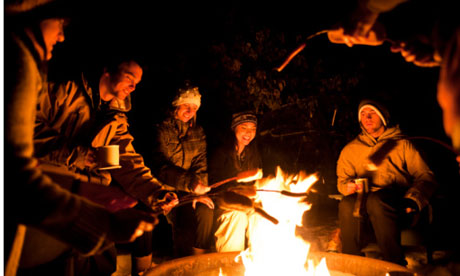 In these days of austerity and the search for simplicity, travelling lightly can also mean taking time out to be enlightened. Inspiration comes in various ways, not just in traditional course-and-travel packages. If this is the year you promised yourself the Big Life Change but you need some encouragement, there are places where you can test out the idea of living off-grid. A growing number of creative communities have evolved out of alternative lifestyles, and they often welcome volunteers who come to explore their creativity as part of a uniquely flexible family. Some offer basic bed and board in exchange for work; others ask for a modest contribution towards food.

A good example is Pablo von Lichtenberg, who opens his rustic farm complex in rural Germany to both artists and volunteers each summer.  The American-born mixed-media assemblage artist provides plenty of inspiration, not just for creative types, but also for people wanting to change their lives. He was brought up in Connecticut and Miami, and studied banking and business administration, then worked for 12 years as a bank manager before a career shift. He learned art technique from American artist John A Watson before heading to Central America and Europe. In 1993, he returned to his family's German roots, gave in to his passion, and has since won awards and exhibited internationally.

Old and young volunteers at Pablo's Farm in Germany. Photograph: Oablo von Lichtenberg Pablo also encourages volunteers to join him on the farm (tinyurl.com/ 65svpkd). In exchange for tasks including feeding the animals and restoring buildings for use as studios, they get all food and accommodation.

A lively summer is ensured as Pablo organises American-style "speakeasy" sessions at which artists and volunteers mix with enthusiastic, and curious, local villagers. He says the farm helps him "get down to earth" after constant travelling, and his "ever-increasingly international family" is proving inspirational to him, too.

Now, with studios in Berlin, Paris, and New York, he runs art workshops, this year including batik, kinetic sculpture and macro-compositional photography. The breaks start in Berlin, with gallery visits, before moving to the rolling landscape of Pablo's farm, Kunsthof Tangendorf. They end with an exhibition of participants' work. The $650 fee includes accommodation and food, but not travel to Germany.  Other communities also welcome artists and trade work for bed and board. Here's our pick from fair work exchange website workaway.info.

At this creative retreat in the mountains, volunteers share the space with artists on retreat and visitors to the ecological guesthouse – it's definitively off-grid. The owners say: "It is a place where one can withdraw from everyday life and focus on one's creativity in a culturally stimulating environment." Accommodation and food vary according to the project available.
tinyurl.com/67lgua6

The Tribodar community is hosted by Michael and Moabi, whose talents run from djembe drumming to yoga. There is time for art as well as daily work in the permaculture garden, animal care and decorating. It's an organised set-up, but accommodation is basic, in tents and caravans, and loos are compost. You provide your own food.  tinyurl.com/6zuqort

As well as a stunning location by the ocean, this sustainable community has a meditation dome for further zoning out. The focus is on transformation and esoteric learning, including ecstatic dance. Volunteers should be prepared for farm work, from fencing to calving.
tinyurl.com/6dcbvsr

Writers and photographers mix with agriculturalists in an alcohol-free rural retreat that's perfect for a technology switch-off – internet and phone access can be limited. The work has an accent on skill-learning – from animal-tending to seed-harvesting. You have a private or shared room in the retreat house, and meals with the family or made from farm food.
tinyurl.com/6fp93t9

The owner of this remote, solar-powered eco house describes herself as a pilgrim/ photographer/musician/nature lover, and offers a space for, "everyone who needs a few days or weeks of rest, reflection and energy recharging". Volunteers work on a range of projects, from renovation to cooking. You get accommodation – which may be a gypsy caravan – in return for two to three hours' work a day, and provide your own food.
tinyurl.com/6ylqktp

A sustainable community on an island in the
Tigre Delta offers the chance to build an auditorium and accommodation from bamboo and mud. Volunteers stay in a house built from recycled materials, or camp, and food costs about 20 pesos (£3.50) a day. It's an organised set-up, with language and tango lessons offered.
tinyurl.com/6zs6qsg

Leave your mark on a sculpture trail at this B&B set in five acres of rainforest. It offers artists, especially sculptors, the space to make and contribute art in return for housework and the heavier aspects of creating the trail. A cabin in the forest is your accommodation.
tinyurl.com/6esx79w